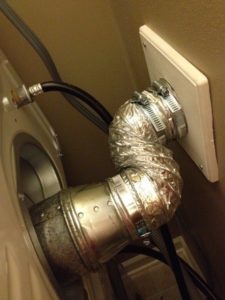 A common summer home repair involves laundry. Specifically, dryers and the vents that allow them to work properly. Some dryer vent projects that I’ve been called to repair are mind-blowing, no pun intended. Here are 3 examples:

1.) The first vent project I recall was both intriguing and dangerous. The hole where the vent pipe was supposed to be attached was underneath the dryer. Needless to say, a 4-inch dryer vent pipe couldn’t fit in the 1 inch of space under the dryer. The client’s only complaint was that the laundry room was always full of lint. Without a proper vent system, the dryer deposited all the lint on the floor, which could have easily cause a house fire.

2.) The second memorable vent project had a vent hose that was over 30 feet long. It had seven sharp turns that maneuvered it through a wall, around a gas line, over some duct work, through a suspended ceiling, over the joist bridging, through the fiberglass insulation and out of the house. Needless to say, the 4 inch vent pipe was plugged up with lint in multiple locations. We were called in after the client’s gas line technician informed them that the venting was not to code.

3.) The third project I’ll mention had a vent penetrating the wall behind the dryer. So far, so good. Then the vent took a turn for the worst, travelling 22 feet straight up to a roof vent. I was able to shorten the vent pipe length to less than 2 feet by directing it out the exterior wall beside the dryer.

Many dryer problems are actually venting problems. If your machine is taking too long to dry clothes, or if you notice any unusual smells or sounds, don’t hesitate to call BSR Services. The sooner, the better.